The Black Amulet (Tales from the Badlands)

Book 2 in the series Tales from the Badlands

‘Delightfully magical and brilliantly told’ Abi Elphinstone, author of Sky Song on The Boy With One NameWelcome to the Badlands … a hidden part of our world populated by creatures which most people think exist only in fairy tales and nightmares. Reunited with his parents, Jones is finally living the ‘normal’ life he’s always wanted.

But, despite leaving the Badlands behind, there’s still magic inside him… His two friends, Ruby and Thomas Gabriel, are struggling with their new lives too; Thomas Gabriel’s magical abilities are fading away and Ruby is realizing she might never be accepted as a ‘proper’ Badlander in a world of monster-hunting men. One thing could help them all – the Black Amulet, a magical artefact hidden for centuries by the most powerful Badlander that ever lived.

But finding it won’t be easy, and using it even harder, because things are never simple when magic is involved… Dive into a world of magic in an adventure perfect for fans of Abi Elphinstone, Jonathan Stroud and J.K. Rowling. 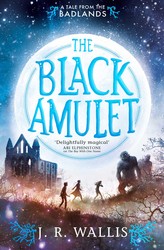 You're viewing: The Black Amulet (Tales from the Badlands) £6.99
Add to basket