The Last Days of the Dinosaurs (26th April)

Some 66 million years ago, an asteroid some seven miles across slammed into the Earth, leaving a geologic wound over 50 miles in diameter. In the terrible mass extinction that followed, more than half of known species vanish seemingly overnight. But this worst single day in the history of life of Earth was as critical for us as it was for the dinosaurs, as it allowed for evolutionary opportunities that were closed for the previous 100 million years.

In The Last Days of the Dinosaurs, Riley Black walks readers through what happened in the days, the years, the centuries and the million years after the impact. Life’s losses were sharp and deeply felt, but the hope carried by the beings that survived sets the stage for the world as we know it now. 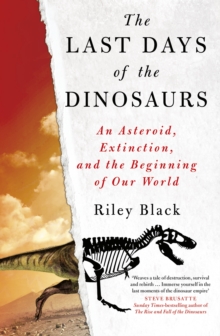