A hilarious whodunnit about two kids trying to save the UK’s top TV talent show from a mysterious saboteur! “Annoyingly good.” – David Baddiel “Ivor is a funny, clever and brilliant writer, so it’s no surprise that he’s written such a funny, clever and brilliant book, which is also heartwarming and full of joy. The man’s a marvel.” – Dermot O’Leary “Kids are going to go crazy for this brilliant book!” “Ivor Baddiel tells a rip-roaring good story – pesky, gleeful and very funny”- Mel Giedroyc “This is a terrifically funny “whodunnit” children’s book” – Peter Dickson (voice of the X Factor) Someone is threatening to destroy Britain’s Biggest New Star, the country’s favourite TV talent show. The secret service decides to send in two young spies, twins Harry and Abby, to investigate.

Their ticket backstage is their father, washed up comedian Gus, who believes the contest is his chance to revive his career. The list of suspects is long, and the twins don’t know whom to trust. But they better track down the culprit soon, before disaster strikes the show – and its royal guest! A fast-paced spy caper packed with laughs and surprising twists, from comedy writer Ivor Baddiel – someone who really knows backstage life on Britain’s favourite talent shows! Perfect for fans of books by David Walliams and Tom Fletcher, and Maz Evans’s Vi Spy.

The cover and spine feature shiny gold lettering, and the book includes black and white illustrations throughout by James Lancett. 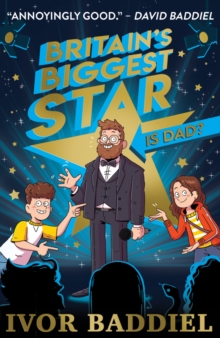 You're viewing: Britain’s Biggest Star? Is Dad? £6.99
Add to basket