Little Badman and the Invasion of the Killer Aunties

Humza Khan is the greatest 11-year-old rapper Eggington has ever known. The problem is, school has got really weird: all the teachers are disappearing and suspicious aunties are taking over.

But when they start to mess with his music, Humza has to get to the bottom of what’s going on. With the help of his friends Umer and Wendy, Humza must hunt for the truth. Can he stop the aunties before they carry out their evil plan?

I’m Humza Khan, the greatest eleven-year-old rapper Eggington has ever known; soon everyone will know my name.

Only problem is school has got really weird, man. All my teachers are disappearing and our aunties are taking over.

It wasn’t too bad at the start, they keep feeding us delicious snacks. Like, all the time.

But now these aunties are trying to mess with my music, so me and my best friends Umer and Wendy are going to hunt for the truth. Cos something big and bad is going on and we won’t let anything mess with my music… or you know, the world.

A hilarious and fast-paced adventure from comedian Humza Arshad and screen writer Henry White, perfect for fans of David Solomons and David Baddiel.

You’ve probably heard of me, right? Little Badman. No? Oh. Well. . . Doesn’t matter. You will do one day. I’m gonna be big. And not like my Uncle Abdul, who ate his own bodyweight in samosas and ended up in hospital. The good kind of big.

Rich, famous and respected. Like Jay-Z, or that old white man from KFC.

I was always destined to be big. Even when I was born my mum said it was like trying to fit a nappy on a dishwasher. I call it big boned. Whatever. Point is, I’m a big fish in a small pond. Like a shark in a fish bowl, or a pit bull in a hamster cage. Sooner or later, I’m gonna explode out of there and the world is gonna know my name. Humza Khan. But you can call me Little Badman.

My path to greatness wasn’t always clear. Even a ninja-rapper-gangster like me has to start somewhere. And I started in the hood. Proper gangland territory: the Little Meadows Primary

School, Eggington. To say there was a lot of gun crime would be an understatement. There was loads. Just not in Eggington. Mostly in America, I think. Still, I reckon it shaped me into the twelve-year- old I am today.

But nothing, and I mean nothing, shaped me as much as my final year at primary school. I don’t know if you’ve ever seen any war movies, about Vietnam or Iraq or the Galactic Empire, but none of that compares to what I went through in my final year at school. To call myself the greatest hero the world has ever known would be arrogant, so I won’t do that. I’ll leave you all to form your own opinion once you get to the end of my tale.

And, like so many of history’s greatest conflicts, it all began with something so small. In my case, it was a bee named Mustafa . . .

I was sitting in class next to Umer, when his pencil case started to vibrate.

‘Is it me or is your pencil case ringing?’ I asked, watching the little metal box rattle along the desk.

‘Why’ve you got a bee in your pencil case, man? Let that bee go!’

‘No way,’ Umer said, trying carefully to peer inside the lid without the bee escaping. ‘I’m keeping him. I’ve never had a pet before.’

‘Yeah, well, at least a worm ain’t gonna sting you.’

‘Who the hell is Mustafa?’

‘You called your bee Mustafa?’

See, this is the kind of thing I have to put up with.

I’m not saying Umer’s an idiot, but you can only watch someone put their shoes on the wrong feet so many times before you start to wonder. Still, he is my best friend. Not forever, obviously. When I’m a famous ninja-rapper I’ll probably be best friends with Busta Rhymes or Dr Dre, or one of the Power Rangers. But, for now, I’ve got to put up with Umer.

‘Did you just get stung?’ I asked.

‘“Killed him”?’ gasped Umer, staring at the pencil case containing his bee. ‘What are you talking about? I haven’t touched him!’

‘Quiet down, man – we’re gonna get in trouble.’

‘You two!’ came a voice from the front of the class. ‘What’s going on back there?’

‘Who on earth is Mustafa?’ asked Miss Crumble, arriving at the desk.

‘A bee?’ she said, looking a little nervous and taking a step back.

‘He’s a goner, miss,’ I replied. ‘Umer basically murdered him.’

‘I’m afraid so, miss,’ I replied, shaking my head.

‘He’s buzzed his last buzz. Gone to the great beehive in the sky. He’s making honey for Tupac.’

‘It’s always something with you two, isn’t it?’

Now it wasn’t long after that that I learned some important lessons about bees. Firstly, not all bees die after they sting you – turns out that’s just honeybees. Secondly, big hairy Mustafa was actually a bumblebee and had no intention of dying anytime soon. And thirdly (and this one was probably most important of all), Miss Crumble is, and always has been, super allergic to bee-stings.

Miss Crumble let out a scream so loud and horrible that Wendy Wang’s glasses shattered right there on her face. Miss C began to flail her arms around like a windmill in a hurricane, desperately trying to swat poor Mustafa. 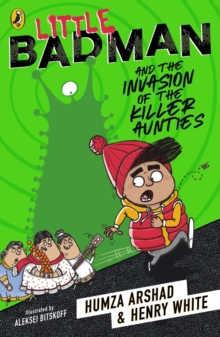 You're viewing: Little Badman and the Invasion of the Killer Aunties £6.99
Add to basket