Orphans of the Tide

The breathtaking fantasy adventure for fans of His Dark Materials that The Times calls ‘Unputdownable’.

The City was built on a sharp mountain that jutted improbably from the sea, and the sea kept trying to claim it back. That grey morning, once the tide had retreated, a whale was found on a rooftop.

When a mysterious boy washes in with the tide, the citizens believe he’s the Enemy – the god who drowned the world – come again to cause untold chaos.

Only Ellie, a fearless young inventor living in a workshop crammed with curiosities, believes he’s innocent.

But the Enemy can take possession of any human body and the ruthless Inquisition are determined to destroy it forever.

To save the boy, Ellie must prove who he really is – even if that means revealing her own dangerous secret . . .

‘Gripping and original’ – The Observer

‘Singularly brilliant’ – Kiran Millwood Hargrave, author of The Girl of Ink and Stars and The Mercies

The City was built on a sharp mountain that jutted improbably from the sea, and the sea kept trying to claim it back. When the tide rose, it swallowed up the City’s lower streets. When the tide fell, it spat them back out again but left its mark. Fresh mussels clung to windowsills. Fish flailed on the cobblestones. That grey morning, once the tide had retreated, a whale was found on a rooftop.

A crowd gathered along the top of the sea wall, to gape at the roof below.

‘It’s an evil omen!’ yelled the old preacher, his breath steaming in the air.

‘The Enemy didn’t do this,’ snorted a sailor. ‘It must have got stuck there at high tide.’

The whale lay on its belly, stretched from one end of the roof to the other. It had beached itself on the Chapel of St Bartholomew, whose rooftop poked above the waves at low tide. Four stone gargoyles stood at each corner, two of them digging sharply into the whale’s skin. Hungry seagulls screeched overhead.

The crowd were so engrossed that none of them noticed the girl’s arrival. She had tired eyes and tangled, dirty blonde hair, mussed‑up from a night of broken sleep. She leaned over the sea wall and bit her lip.

‘It’s too big to be out of the water,’ she said, speaking more to herself than anyone else. ‘It’ll have crushed its lungs just by lying there.’

A tiny, wide‑eyed boy next to her looked up in horror. He nestled close to his mother’s side, watching the girl warily. Her face was pale, with three red scratches down one cheek, and she smelled faintly of fireworks. What was worse, she was dressed like a man, and not an upstanding one either. She wore a frayed crimson scarf, and a coat that was long and hooded, stitched together from weathered cloth and grey sealskin.

‘Wh‑who are you?’ said the boy, his lips quivering.

‘I’m Ellie,’ said the girl distractedly, rummaging in her coat pockets. She pulled out a magnifying glass, an onion, and finally a penknife with a razor‑sharp edge. The boy reached for his mother’s hand.

‘If we don’t cut this whale open soon,’ said Ellie, holding up the knife, ‘it will explode.’

The boy began to cry.

‘No, really, it will!’ said Ellie, raising her hands. ‘Dead whales start to decay from the inside. There will be a dangerous build‑up of gas.’

The mother turned away, covering her mouth with the back of her hand.

‘I know!’ said Ellie. ‘There’ll be guts everywhere. And you wouldn’t believe the smell! Hmm,’ she added, staring down at the penknife. ‘On second thoughts…’

Ellie turned to a second girl standing behind her. She looked to be the same age, twelve or thirteen maybe, with a mess of curly ginger hair. She wore a huge woollen blue jumper, heavy black boots, and a bored expression.

‘Anna, I need you to run back to the workshop and get my flensing tool,’ said Ellie.

‘It’s a sharp blade on the end of a long pole,’ said Ellie. ‘It’s in the loft beside the bookcases, hanging below a telescope and a rifle.’

‘You have a rifle?’ said Anna, leaning forward, suddenly interested. ‘And bullets?’

‘Just hurry, all right!’ said Ellie, and Anna rolled her eyes and slouched off up the street.

Ellie hopped on to the sea wall, then dropped down the other side. The crowd gasped as she landed on the roof of the chapel ten feet below.

‘What is she doing?’ said a woman.

Ellie held out her hands to steady herself, stepping along the rooftop like a tightrope walker. The whale’s eyes were closed, eyelids wrinkled and creased like those of an old man. She knelt, drawing one hand delicately along the whale’s side. Its skin was hard, covered in white barnacles and crisscrosses of scar tissue.

‘What’s going on here?’ said a voice above. Ellie glanced up and saw a young city guardsman nudging his way through the crowd, gawky and big‑eared, dressed in a black cap and dark blue greatcoat.

‘There’s a whale on the roof,’ said a woman.

‘That girl’s gone down to it,’ said another.

‘What?’ the guardsman said, then he looked down and noticed Ellie on the roof. ‘What… what is she doing?’ He clapped his hands to his head. ‘Watch out, miss! That whale will eat you!’

‘Whales don’t eat people,’ Ellie sighed, but no one heard. They were all talking over each other now.

The whale’s massive body rose and fell beneath her hand, as it drew a ragged breath.

It was still alive!

Ellie looked around, wondering if it was possible to get the whale back in the water. A ship might have been able to pull it free when the tide came back in, but that was hours away.

As she spoke, Ellie thought she heard something faint coming from inside the whale. The clamour of the crowd made it impossible to be sure.

‘Get away from it!’ the guardsman yelled, though he seemed too afraid to climb down to the roof himself.

‘I think you should drag her off.’

‘Someone call the Inquisition!’

‘Please!’ Ellie yelled, but no one paid her any attention. She pulled a marble‑sized device from her pocket, wrapped in yellowed paper. With a flick of her wrist she hurled it up at the sea wall. There was a crack and a flash of light, and a riot of frenzied screeching as the seagulls fled. The crowd staggered back and shielded their eyes, shocked into silence.

Ellie held up her hand. ‘Listen,’ she said.

And so they all did.

And in the silence they could hear it, drifting towards them.

It was the whale.

The whale was singing.

It was a mournful, melodious rise and fall, reverberating from deep within the creature. Ellie had heard whales sing before, but never one out of water. She had thought it was part of some mating ritual, yet here was this dying whale, singing, for whose benefit she could not guess.

They all listened in awe, for many long minutes.

Then the whale opened its eye.

‘Incredible,’ Ellie whispered. The eye was the dark blue of a cold sea. It focused on her – she could have sworn it – and all she knew was its gaze and that song. And for those few, wondrous moments, all the pain inside her seemed to go away.

The song grew quieter as if it were drifting off to the horizon. The eye closed. The tail stopped moving.

And all was silent, even the sea.

‘I’ve got it!’ yelled Anna triumphantly, pushing her way to the sea wall, holding the flensing tool over her head. The crowd turned to look at her. ‘What?’ she asked, then handed the tool down to Ellie, blunt end first.

‘What are you going to do?’ the guardsman called.

Ellie pointed to the whale’s belly. ‘I’ll have to cut it open, low down. That will prevent any gas building up inside.’

Ellie rested the tool upon one of the many grooves that ran lengthways along the whale’s white belly and pressed. The skin was tough and thick and she was soon sweating from the effort. Finally, the blade punctured the skin, and Ellie almost lost her balance as it sank into the soft organs underneath. A rank smell seeped from the wound and Ellie held her breath. She worked the flensing tool back and forth, cutting down the creature’s side. The flesh parted, purple guts drooping from the opening.

Anna’s face had contorted, her eyes fixed in disbelief.

‘Sweet mercy,’ said the guardsman, his hand at his mouth.

There was a confused muttering from the crowd. An old lady screamed. For some reason, Ellie found she couldn’t move.

Her body stiffened. The flensing tool fell from her fingers. She looked down.

Something was holding her by the ankle.

It was skinny and trembling, and slicked with thick blood.

A hand reaching out from the cut in the whale. 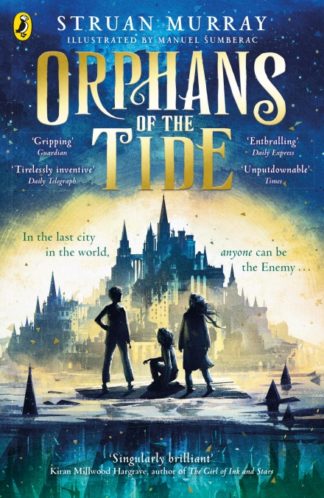 You're viewing: Orphans of the Tide £7.99
Add to basket