The Dark Prophecy (The Trials of Apollo Book 2)

The second book in the latest series from international bestselling author, Rick Riordan He was once an immortal God, now he’s an awkward teenager. Things aren’t going well for Apollo. There’s only one way he can earn back Zeus’ favour, and that’s to seek and restore the ancient oracles – but that’s easier said than done.

Apollo must head to the American Midwest where, rumour has it, a haunted cave may hold answers. There are a few things standing in his way though. The cave could kill him, or drive him insane.

Oh, and a Roman Emperor, whose love of bloodshed makes Nero look tame. To stay alive, Apollo needs the help of a mortal goddess, a bronze dragon, and some familiar faces from Camp Half-Blood. Will he survive the greatest challenge of his four thousand year existence?

Read this extract from the book:

1
Lester (Apollo)
Still human; thanks for asking
Gods, I hate my life

When our dragon declared war on Indiana, I knew it was going to be a bad day.

We’d been travelling west for six weeks, and Festus had never shown such hostility towards a state. New Jersey he ignored. Pennsylvania he seemed to enjoy, despite our battle with the Cyclopes of Pittsburgh. Ohio he tolerated, even after our encounter with Potina, the Roman goddess of childhood drinks, who pursued us in the form of a giant red pitcher emblazoned with a smiley face.

Yet, for some reason, Festus decided he did not like Indiana. He landed on the cupola of the Indiana Statehouse, flapped his metallic wings and blew a cone of fire that incinerated the state flag right off the flagpole.

Behind him on the dragon’s spine, Calypso gripped Festus’s scales for balance. ‘Could we please get to the ground? Gently this time?’

For a formerly immortal sorceress who once controlled air spirits, Calypso was not a fan of flying. Cold wind blew her chestnut hair into my face, making me blink and spit.

That’s right, dear reader. I, the most important passenger, the youth who had once been the glorious god Apollo, was forced to sit in the back of the dragon. Oh, the indignities I had suffered since Zeus stripped me of my divine powers! It wasn’t enough that I was now a sixteen-year-old mortal with the ghastly alias Lester Papadopoulos. It wasn’t enough that I had to toil upon the earth doing (ugh) heroic quests until I could find a way back into my father’s good graces, or that I had a case of acne that simply would not respond to over-thecounter zit medicine. Despite my New York State junior driver’s licence, Leo Valdez didn’t trust me to operate his aerial bronze steed!

Festus’s claws scrabbled for a hold on the green copper dome, which was much too small for a dragon his size. I had a flashback to the time I installed a life-size statue of the muse Calliope on my sun chariot and the extra weight of the hood ornament made me nosedive into China and create the Gobi Desert.

Leo glanced back, his face streaked with soot. ‘Apollo, you sense anything?’

‘Why is it my job to sense things? Just because I used to be a god of prophecy –’

‘You’re the one who’s been having visions,’ Calypso reminded me. ‘You said your friend Meg would be here.’

Just hearing Meg’s name gave me a twinge of pain. ‘That doesn’t mean I can pinpoint her location with my mind!

‘Guys, cool it.’ Leo patted the dragon’s neck. ‘Apollo, just try, will you? Does this look like the city you dreamed about or not?’

I scanned the horizon.

Indiana was flat country – highways crisscrossing scrubby brown plains, shadows of winter clouds floating above urban sprawl. Around us rose a meagre cluster of downtown high-rises – stacks of stone and glass like layered wedges of black and white liquorice. (Not the yummy kind of liquorice, either; the nasty variety that sits for aeons in your stepmother’s candy bowl on the coffee table. And, no, Hera, why would I be talking about you?)

After falling to earth in New York City, I found Indianapolis desolate and uninspiring, as if one proper New York neighbourhood – Midtown, perhaps – had been stretched out to encompass the entire area of Manhattan, then relieved of two-thirds of its population and vigorously power-washed.

I could think of no reason why an evil triumvirate of Ancient Roman emperors would take interest in such a location. Nor could I imagine why Meg McCaffrey would be sent here to capture me. Yet my visions had been clear. I had seen this skyline. I had heard my old enemy Nero give orders to Meg: Go west. Capture Apollo before he can find the next Oracle. If you cannot bring him to me alive, kill him.

The truly sad thing about this? Meg was one of my better friends. She also happened to be my demigod master, thanks to Zeus’s twisted sense of humour. As long as I remained mortal, Meg could order me to do anything, even kill myself . . . No. Better not to think of such possibilities.

I shifted in my metal seat. After so many weeks of travel, I was tired and saddle sore. I wanted to find a safe place to rest. This was not such a city. Something about the landscape below made me as restless as Festus. 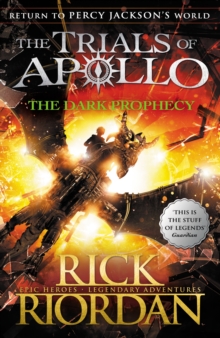 You're viewing: The Dark Prophecy (The Trials of Apollo Book 2) £7.99
Add to basket