Free the Beasts. Live the Adventure. Battle Beasts and fight Evil with Tom and Elenna in the bestselling adventure series for boys and girls aged 7 and up!Tom and Elenna are celebrating the safe return of Prince Rotu after their successful Quest to rescue him from the Evil Wizard Zargon …

but Evil never rests, and news soon reaches them that Zargon has disappeared and the tombs of the legendary Four Masters have been ransacked. It’s time for a new Quest, and this time they must tackle four ancient Beasts in the places they were originally killed. First on the list is Teknos, an armoured turtle-Beast with a razor-sharp beak!There are FOUR thrilling adventures to collect in The Four Masters series – don’t miss out! Teknos the Ocean Crawler, Mallix the Silent Stalker, Silexa the Stone Cat and Kyron, Lord of Fire.

If you like Beast Quest, check out Adam Blade’s other series: Team Hero, Sea Quest and Beast Quest: New Blood! 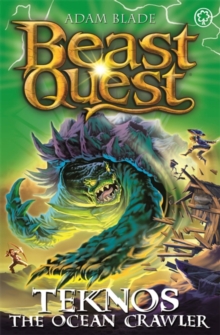