The Christmasaurus and the Winter Witch

‘She is the best-kept Christmas secret of all,’ whispered Santa Claus. ‘Which is surprising, because Christmas itself would not exist without her. She is older than time itself, yet still as young as tomorrow. She is known only as the Winter Witch.’

One year has passed since William Trundle’s incredible adventure with the most extraordinary dinosaur: the Christmasaurus. Now, William is swept back to the magical North Pole, where he meets the mysterious, icy Winter Witch – whose power to control time allows Santa Claus to make the long journey all around the world every Christmas Eve.
And when they learn that the fate of Christmas itself hangs in the balance, William and the Christmasaurus must work with the Winter Witch to protect it…

Full of magic and music, humour and heart, and a friendship like no other, The Christmasaurus and the Winter Witch is the most enchanting Christmas read for the whole family.

THE BEGINNING OF THIS STORY

William Trundle opened his eyes as Pamela Payne carefully stepped into his bedroom with a breakfast tray wobbling in her hands. ‘Oh… morning!’ he said sleepily, propping himself up on his dinosaur pillow.

‘Your dad made the pancakes,’ Pamela explained as she set the tray in front of him, trying not to spill any more orange juice than she already had. ‘Just how you like them, apparently.’

William looked down and saw the stack of steaming yumminess wafting up warm smells of vanilla and cinnamon.

‘Vanilla and cinnamon… vaninnamon! It’s what Dad calls it,’ William explained, picking up his knife and fork and tucking in.

‘Where is Dad?’ William asked. But his question was answered by a cheerful knock on the bedroom door next to his.

‘Wakey-wakey, Brenda!  It’s the start of the Christmas holidays! Time for pancakes and orange juice. It’s a Trundle Christmas Tradition!’ sang Bob Trundle from out in the hallway, followed by the click of Brenda’s bedroom door opening.

‘No school and pancakes! Yes!’ cheered Brenda’s muffled voice from the next room.

‘Your dad said that now that Brenda and I live here, we have to experience the Trundle Christmas Traditions,’ Pamela explained, putting on her best Bob voice.

William grinned. ‘Well, I hope you’re ready for the most Christmassy Christmas EVER!’ he said through a mouthful of pancake.

‘You know what, I think that’s just what Brenda needs.’

‘What about you?’ William said.

‘Oh, I’ll try my best,’ said Pamela, smiling. ‘But I am not wearing one of those awful Christmas jumpers!’

William frowned. ‘Oh, but Dad has already got you a musical one, with lights and everything…’

Pamela paused for a moment and William saw a flash of festive fear in her eyes.

Pamela breathed a sigh of relief and they both laughed.

‘When you’ve finished your breakfast, your dad said to make your way to the kitchen for your advent calendar.’

And, with that, Pamela left William alone to enjoy his breakfast – but he wasn’t alone for long. A few moments later, William heard a little creak from the hallway, and out of the corner of his eye, he noticed his bedroom door opening a peek.

‘I know you’re there, Brenda. You are literally the worst at spying on people,’ William said, not even looking up from his plate.

‘Not fair! I’m great at spying. I’ve just not lived here long enough to figure out where all the creaky floorboards are yet!’ Brenda huffed. She waltzed in with her breakfast tray and plonked herself down on William’s bed, making herself comfortable.

‘This is awesome!’ she said, shoving her last huge slice of syrup-covered pancake into her mouth. ‘How many Trundle Christmas Traditions are there?’

William smiled. ‘Well, today it’s mince pies. Dad and I always make them on the first day of the school holidays! Then we can decorate our bedrooms with the leftover tinsel Dad couldn’t fit in the living room. And before bed we’ll watch a Christmas movie. Maybe two if there’s time!’

‘I just never imagined having Willypoos as a brother would actually be so awesome.’

Yep, you heard that correctly. William and Brenda referred to themselves as stepbrother and sister! And that’s because they were!

If you cast your brains back to last Christmas, you may remember that Bob Trundle and Pamela Payne – William’s dad and Brenda’s mum – were swept away with the magic of Christmas morning and danced in the snowy street as Santa flew into the sky, after an evil hunter was gobbled up by a flying dinosaur. (It’s a long story – literally!)

Well, that Christmas magic didn’t want to leave them and, in the summer, Bob and Pamela decided that the Paynes would move in with the Trundles! It was a bit of a squeeze in their wonky little house, and sometimes William wondered if he’d ever get used to it. It had been just him and his dad for a very long time, after all.

Now back to this Christmas…

Brenda stared up at the dinosaur wallpaper that covered every inch of William’s bedroom walls.

Above his desk, he had a corkboard covered with drawings and pieces of artwork. All of them were of the same thing: a blue flying dinosaur, with shimmering scales and a frosty mane of icicles. 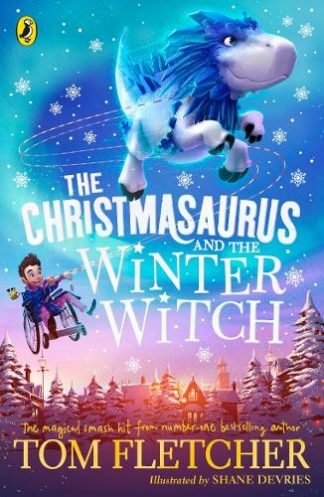 You're viewing: The Christmasaurus and the Winter Witch £6.99
Add to basket