The Old Kingdom is a place of free magic, necromancers and ancient spirits bound to elemental forces. Who will guard the living when the dead arise?Sabriel has spent most of her young life far away from the magical realm of the Old Kingdom, and the Dead that roam it. But then a creature from across the Wall arrives at her all-girls boarding school with a message from her father, the Abhorsen – the magical protector of the realm whose task it is to bind and send back to Death those that won’t stay Dead.

Since the demise of the Royal Family the Dead have become stronger and more fearless, and now it seems their forces are threatening to overwhelm the Old Kingdom. Sabriel’s father has been trapped in Death by a dangerous Free Magic creature. He urges her to return to her homeland, and to discover who or what is behind this uprising.

Armed with her father’s binding-bells and sword, she soon finds companions in Mogget, an ancient spirit bound into the body of a cat, and Touchstone, a young Charter Mage whom Sabriel frees from a long, magical imprisonment. As the three travel deep into the Old Kingdom, threats mount on all sides. And every step brings them closer to a battle that will pit them against the true forces of life and death – and bring Sabriel face-to-face with her own destiny. 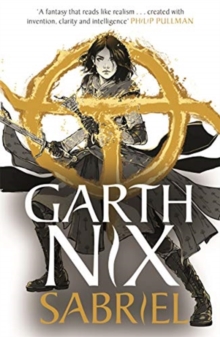