Bronte Mettlestone is ten years old when her parents are killed by pirates. This does not bother her much: her parents ran away to have adventures when she was a baby. She has been raised by her Aunt Isabelle, with assistance from the Butler, and has spent a pleasant childhood of afternoon teas and riding lessons.

Now, however, her parents have left detailed instructions for Bronte in their will. (Instructions that, annoyingly, have been reinforced with faery cross-stitch, which means that if she doesn’t complete them, terrible things could happen) She must travel the kingdoms alone, delivering gifts to ten other aunts: a farmer aunt who owns an orange orchard, a veterinarian aunt who specializes in dragon care, a pair of aunts who captain a cruise ship, and a former rock star aunt who is now the reigning monarch of a small kingdom. But as she travels from aunt to aunt, Bronte suspects there might be more to this journey than the simple delivery of treasure; though little does she suspect that she will have to play such a big part in the extraordinary events that follow.

Fans will also love book II in the series:9781913101107 The Slightly Alarming Tale of the Whispering Wars

Praise for THE EXTREMELY INCONVENIENT ADVENTURES OF BRONTE METTLESTONE

With its storytelling aplomb, humor, imagination, and many twists and turns, this novel places Moriarty…firmly in Diana Wynne Jones territory. Readers will want to begin rereading this spellbinder just as soon as they finish it, to find all the clues and connections and coincidences Moriarty drops and weaves and reconciles throughout.

An absolute sparkling delight of a story! Whisperers, water sprites, spellbinders and faery-cross stitch; this book is brimming with bright new magic…just perfect.

Have I led you wrong about middle grade fantasy in the past? THE EXTREMELY INCONVENIENT ADVENTURES OF BRONTE METTLESTONE brings all the strengths you’ve praised in Jaci Moriarty’s fiction – her brilliant plotting, her wit, her delicious use of magic, and most of all, her uncanny ability to turn a group of characters into a group of friends – I think this time she brings those strengths to the group that will most appreciate them: middle grade readers.

Arthur Levine, editor of BRONTE METTLESTONE and the HARRY POTTER series, in a letter to bookseller 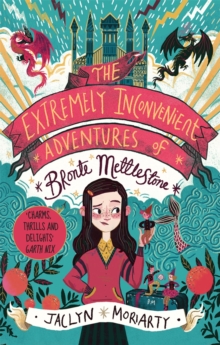 You're viewing: The Extremely Inconvenient Adventures of Bronte Mettlestone £7.99
Add to basket