From the author of the critically acclaimed memoir, The Boy on the Shed, comes a powerful tale of grit and resilience, told with great humour, openness and profound bravery. Former Newcastle United winger Paul Ferris was 51. He had successfully forged a post-football career as a physio, barrister and then a CEO, and his award-winning memoir, The Boy on the Shed, was just about to be published.

But then he was diagnosed with prostate cancer. This honest, sometimes brutal and frequently funny book tells the story of what happened next. Prostate cancer.

It’s a phrase that strikes fear into the heart of every man. It’s the most common male cancer, but treatable if it’s caught early enough. Paul doesn’t shy away from describing that treatment.

And neither does he hold back on its life-changing consequences – from harrowing surgery, humiliating procedures and excruciating consultations – as he strives to become the man he once was again. The mental challenges and psychological impact of living with this acute condition are explored in Paul’s revealing and riveting narrative that represents rare male honesty, but this is never a ‘poor me’ book or not in any way self-pitying. Courageous, inspirational and beautifully written, The Magic in the Tin is a rare thing: deeply moving yet rich in humour, written by a true sportsman in every sense of the word.

“I believe anyone who enjoyed The Boy on the Shed will love The Magic in the Tin. Together, they tell my whole story.” Paul Ferris 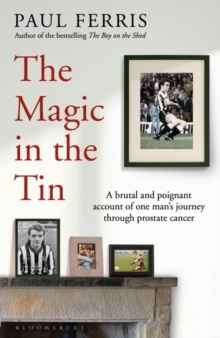