ARE YOU A GIFTED CHILD LOOKING FOR SPECIAL OPPORTUNITIES?

When a peculiar advertisement appears in the newspaper for children to take part in a secret mission, children everywhere sit a series of mysterious tests. In the end, just four children succeed: Reynie, Kate, Sticky and Constance. They have three things in common: they are all honest, all remarkably talented and all orphans.

They must go undercover at the Learning Institute for the Very Enlightened where the only rule is that there are no rules. There they must work as a team to save not only themselves, but also the world outside the walls …

Join a group of smart and resourceful junior sleuths as they solve a series of page-turning puzzles and mysteries.

“… I enjoyed it very much — great cast of characters, lots of cool puzzles and mysteries. The book made me feel nostalgic, because it reminded me of some of the better children’s books I grew up with, like Charlie and the Chocolate Factory and The Phantom Tollbooth. Stewart’s storytelling has an old-fashioned elegance to it … the second book in the series is out now and I will definitely be picking it up.”   RICK RIORDAN

‘It was the puzzles that led me to write the book in the first place. I’d long had an image in mind of a child taking a difficult test that was more than it appeared to be. To me that seemed the beginning of an intriguing story. When a similar idea occurred to me later, I thought of it as a possible addition to the first one. From there the story began to take shape. So although the book might work without the puzzles, it would not exist without them.’  Trenton Lee Stewart 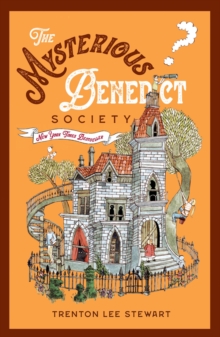 You're viewing: The Mysterious Benedict Society (Book 1) £7.99
Add to basket