The Worries: Sohal Finds a Friend

Everyone feels worried sometimes. But what if your worries came to life and started following you around? Sohal worries about a lot of things: the dark, mutant sheep, being alone – you name it, he worries about it!
So one night he tries drawing his worries to make himself feel better – and somehow they look a lot less worrying once they’re scribbled down.

But then imagine Sohal’s surprise when he wakes up the next morning to find a set of funny, furry friends at the end of his bed!
His worries have come to life, and it’s not long before Hurt, Fail, Anger, Big and Alone have turned his world upside down.
Now it’s up to Sohal to work out how to keep his worries under control – and have some serious fun while he’s at it!
The Truth Pixie meets Inside Out in this hilarious, highly illustrated new series, perfect for helping children gently work through their worries and concentrate on having fun.

That night Sohal didn’t have any bad dreams. He slept soundly, with a smile as big as a scooped-out moon on his face… until he was woken by a loud SQUEAK.

At first, he thought it was Ham Solo, but the squeak didn’t sound… hamster enough. Sohal slowly opened his eyes, and in the glow of his (many) night lights, he saw some shadowy shapes at the end of his bed.

Maybe it’s Ham Solo with an army of hamster Jedi? Sohal thought. He leaned in closer (but not too close). Then he realized.

These weren’t hamsters. They were the monsters from his drawing!

But, now that he saw them for real, he saw that they were actually kind of cute.

‘Who are you?’ Sohal cried.

One of the monsters shuffled forward.

Sohal was alarmed to see that it had SIX eyes. What on earth did it need SIX eyes for?!

‘We are your Worries,’ the monster said. ‘And my name’s HURT. I worry about, well… getting hurt, mainly.’

‘Are you real?’ Sohal said, pinching himself hard, in case he was still sleeping.

‘Well, we’re all the things you worry about, so we definitely ARE real, thank you very much,’ Hurt said, scratching at a bandage on his head.

A creature that looked like a furry octopus came forward next, nudging the other Worries out of the way with its tentacles.

‘Excuse me, excuse me – I think you’ll find I’m in charge around ’ere,’ she said gruffly. ‘Allow ME to say hello. I’m BABS. Nice to meet ya, darlin’. I look after all them Worries.’ Babs pointed to the creatures sitting behind her.

Sohal frowned. ‘So, you’re not a Worry yourself, then?’

‘I’m just LOTS of Worries all at once. You know that weird feelin’ in yer tummy when you can’t quite put yer finger on what’s worryin’ ya?’

‘Well, that’s me! I’m the one who figures out which of these squirts needs attention.’

‘Hey, who you calling squirt?’ a third Worry piped up. She was much smaller than Babs. She also had pointy ears on the top of her head and sharp little teeth.

‘Don’t start, Ang,’ Babs warned, raising a furry tentacle. ‘Listen, why don’t you lot do somefink useful and introduce yerselves to the lad?’

Babs started lining up the Worries on the bed in front of Sohal. They wriggled and squirmed and squeaked in protest before eventually giving in to her many-tentacled grip.

‘I suppose I’ll go first then, as none of the rest of you have got the guts,’ the small monster said, rolling her eyes. ‘Yo, I’m ANGER. But I’m known as The Ang. When people see me coming, they say, I don’t like folks yelling or frowning, or animals with teeth. Uh-uh. I got a turquoise belt in karate, judo, aikido, taekwondo, anacondo – you name it. So, if any punk gets mad with me, I get REAL mad with them. Know what I’m saying?’Ang did some air chops and kicked her little legs about.

‘Is too!’ Ang snapped. ‘You just ain’t heard of it cos it’s so impossible to get. HI-YYAAAAAA! Hi-yaaaa! Hi-yyaaa!’

Sohal watched Ang attempt some painful-looking backflips and decided not to argue. Instead, he turned his attention to the next Worry in line, who had a nose that looked like it might honk if you squeezed it.

‘Hey, I’m BIG,’ he said. ‘I worry about growing up and stuff. I don’t like getting dressed or brushing my teeth or any kind of responsibility. No, sir. It gets me all in a bumfuzzle! And if I’m gonna be honest… I’d like to go back to being a baby and wearing nappies again.’

A Worry with one eye was up next. It stood with its head down and

its spindly arms hanging awkwardly by its side.

‘Hiyaaa. Me name’s FAIL,’ he said in a trembling high-pitched voice. ‘I worry about getting things wrong. I’m rather good at cheating and keeping me mouth shut for a REAAAAALLY long time. Errr… that’s about it, really!’

The last Worry, the most worried-looking of all, resembled a ball of dark knotted hair. All Sohal could see of its face was two wide, TERRIFIED eyes.

Sohal waited for it to speak. But the Worry just sat there, frozen to the spot. ‘Ooh, this one’s terribly shy,’ Babs said, putting her tentacles on her hips. ‘Ya find it hard to talk to people, don’t ya? Come on, darlin’, tell the lad yer name.’

‘I’m ALONE,’ the Worry squeaked at long last. ‘I worry about… er, well, being alone. I don’t like empty places or really crowded places or the dark, but I do like playing on phones and the internet. And –’ she paused – ‘pickled-onion-flavour Monster Munch.’

‘Er, okayyyy,’ Sohal said, trying to take in everything he’d heard. ‘Well, it was nice to meet you all. But could you… go away now, please? I’ve got to get ready for school in a bit.’ 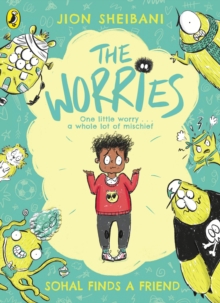 You're viewing: The Worries: Sohal Finds a Friend £6.99
Add to basket