Eight kings of England were the named Henry, but only two of them were born as heirs to the throne and these – the third and sixth – proved to be the weakest. Two seized the crown by force of arms, one by craft and opportunistic speed, and one by skilful diplomacy and an early flowering of that great British virtue, compromise. Among their number are saints and monsters, the best known and the least known of English kings.

One was a storybook hero, leading an army to triumph against overwhelming odds. Another sat out a battle, singing to himself and playing with his fingers while the arrows flew. Half of them have been accused of murder, though in general the actual killings were carried out by others.

When we look at the contributions made by the eight kings of that name, we find they underpin almost every aspect of our nation and its institutions. To the first two we owe our legal system and department of finance, to the third, intentionally or otherwise, the origins of our parliament. The fifth decreed the widespread use of English in official documents, leading to dramatic developments in that language.

The seventh transformed the tax system and introduced legal reforms that curbed the power of the nobility. The eighth, again arguably unintentionally, brought into being the Church of England. Between them, these English monarchs represent every possible shade of kingship, and each in his own time was ‘Harry of England’. 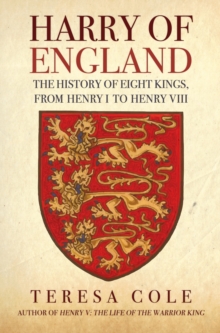