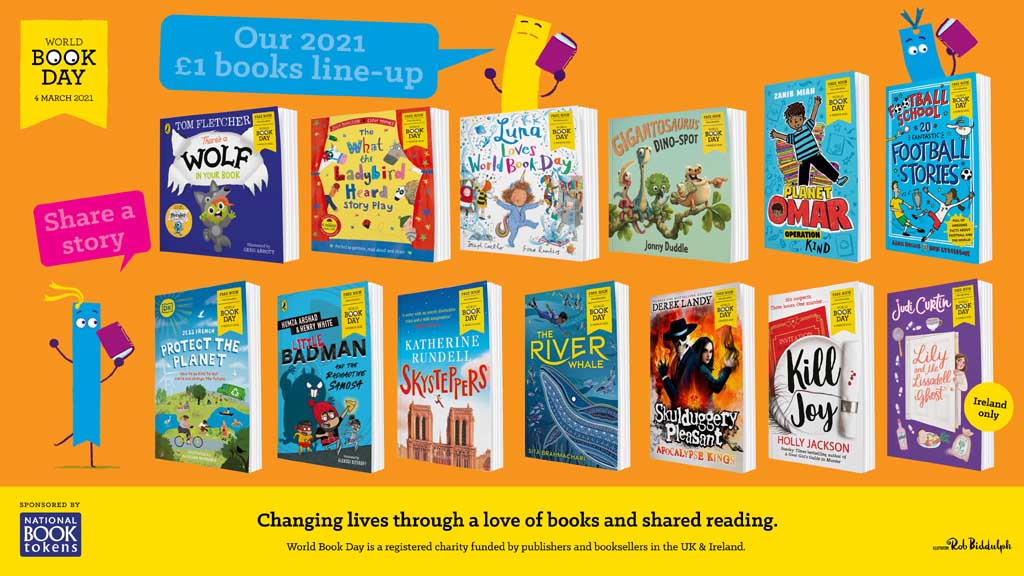 In the previous blog post, I told you about what we were hoping to do for this year’s World Book Day.

I’m please to announce that these are the books you can choose from!

Remember, you can buy them with your special £1 WBD voucher, or you can buy them for a pound.
One token per child, as per the terms and conditions.
If you click on the picture by the book description, you will be taken to a sneaky-peek of the book. 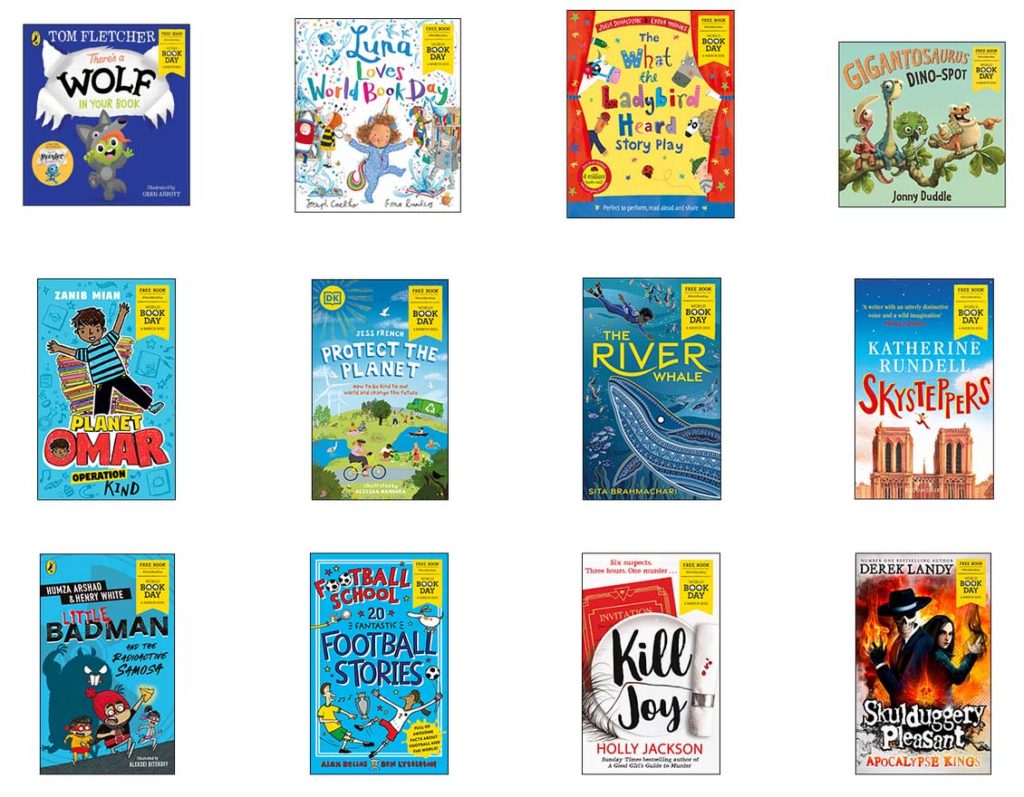 There’s a Wolf in Your Book!

WOW!  Monster, Dragon, Alien, and Witch have made you a book! Jump in to explore the interactive adventure inside … but make sure you watch out for the BIG BAD WOLF!

Today is World Book Day and Luna can’t wait. She has the whole day planned… Dress up as her favourite book character: a unicorn! Meet an author and an illustrator. Buy a new book with her book token. But – disaster! – Luna the Unicorn’s costume has ripped! Can Dad come to the rescue with a magic potato?

One clever ladybird, two bungling burglars… and a whole farmyard of fun!

Hefty Hugh and Lanky Len are two crafty robbers with a cunning plan to steal the farmer’s fine prize cow. But little do they know that the tiniest, quietest creature of all has overheard their plot, and she has a plan of her own…

The first story in the brilliantly funny What the Ladybird Heard series has been adapted by author Julia Donaldson into a fun and easy-to-read play script, with bright and distinctive illustrations by Lydia Monks — perfect for reading aloud, acting out and even putting on your very own play!

“I’ve made this thing I call a ‘BOOK’. I might let you three have a look. We’ll play my game called DINO-SPOT. To win, you’ll have to spot the lot!” Bonehead thinks he’s the best dino spotter. But can he find GIGANTOSAURUS?

One of Omar’s best friends, Daniel, has a little sister who goes to hospital regularly. He usually finds it easy to cheer her up when she’s there, but this time he feels he needs to do something extra special.

Enter Omar and their other best friend Charlie to help with Operation Kind! The boys try to come up with the perfect surprise for Suzy, and when they find out her favourite author is in the UK for just one day it feels like it was meant to be.

Can the boys overcome all of the ridiculous obstacles that get thrown in their path and face their fears, in a race against time to get a signed copy of the book for Suzy?

Our planet is precious, and it’s up to us to take care of it. You may feel small, but your small actions can make a big difference. This book will teach you that by acting with kindness towards other people, plants, animals, and yourself, you can help to protect the planet.

Immy has always loved wild swimming; one day, she hopes to become a marine biologist. Tomorrow is the first step towards that goal – completing her entry level diving certificate.

But her plans for a good night’s sleep are ruined by a strange and vivid dream of a distressed whale in the river. At school she tries to shake it off, but discovers that her nightmare has leaked into reality.

Immy and her trusty friend Cosmo must head for the Thames on a mission to save the trapped river whale. Can Immy use her skills to release it from the rubbish-filled nets it’s caught in and guide it home?

Told in a mixture of free verse and prose, this is the beautiful new short adventure from Sita Brahmachari, with illustrations by Poonam Mistry.

High above the streets of Paris live the rooftoppers, a secret gang of children who eat, sleep and tumble amongst the chimney pots. It’s a perilous life, but for Matteo and Mercedes the adventure is only just beginning. Caught up in a long-standing feud that threatens their existence amongst the stars, they find themselves on a hunt across Paris, tearing across the roofs of Versailles and the Louvre, searching for hidden treasure in a race against Henri Danglars – the enemy who would seek to destroy that which they love best.

From bestselling and multiple-award-winning author Katherine Rundell, this joyful new story of the rooftoppers of Paris is full of her trademark bravery and adventure. It’s a treat just waiting to be discovered.

Little Badman and the Radioactive Samosa

Twelve-year-old Humza Khan, aka Little Badman is, amongst lots of other things: Eggington’s greatest rapper, a ninja, an all-round legend. That’s all according to Humza. And, to be honest, Eggington (his home town) is quite small. He has saved the word a couple of times though – from alien slugs and evil time-travelling teachers.

They are very cool adventures, and we’ll tell you about them some time, but this story will blow your mind. Humza and his two friends, Umer and Wendy, have narrowly avoided being hit by rock from outer-space. What does get hit, though, is a box of delicious samosas, which turn . . . radioactive. The three friends wake up the next day to find they have superpowers, which is pretty cool. What’s less cool is the giant hamsters roaming the town. Looks like a job for Little Badman and his crew . . .

Find out the true stories of the star players, top teams and game changers who have shaped football history. Stories include:

The bestselling Football School series explains the world through football. This collection is packed with fascinating facts and super stats, so you’ll learn loads about football, as well as other amazing subjects such as history, science and geography.

Make reading even more fun by downloading these great activities from the Football School series:

Pippa Fitz-Amobi is not in the mood for her friend’s murder mystery party. Especially one that involves 1920’s fancy dress and pretending that their town, Little Kilton, is an island called Joy.

But when the game begins, Pip finds herself drawn into the make-believe world of intrigue, deception and murder. But as Pip plays detective, teasing out the identity of the killer clue-by-clue, the murder of the fictional Reginald Remy isn’t the only case on her mind . . .

Find out where it all began for Pip in this prequel to the best-selling A Good Girl’s Guide to Murder and Good Girl, Bad Blood.

Three ancient gods are freed from their prison with only one desire: to destroy the planet and everyone on it.

To save us all, Skulduggery Pleasant and Valkyrie Cain must go undercover in a Dublin school. Skulduggery has to blend in with the teaching staff, while Valkyrie has to pass for an ordinary schoolgirl. Above all else, no matter what happens, they both must act completely and utterly normal.

We are so dead.

The Sneak-peek inside feature is called Book2Look and has been made possible by Nielsen Book, who provide a unique range of services, enabling books to be discovered by book buyers everywhere.

This year is a strange one (again!)

The last time we were out and about selling our books was World Book Day (WBD) last year.

This year will be very different – we won’t be able to visit your school, setting or nursery, but we DO have loads and loads of World Book Day books for you to “buy” with your £1 token.

The tokens are still being distributed, mostly in the same way, but there are also some electronic tokens. Your school/setting/nursery will provide you with the tokens in the same way (or remotely, Covid-dependent), and you can still swap them for the fantastic books, or as £1 off a normal-priced book.

Please do spread the word.

This is how we’re going to do it this year:

1: you can email me or phone me or message me through social media to ask for the book you want, and I will deliver it to your house.

2: if you live further afield, I can post you a book, but I will have to charge £1 for postage, because although these books are essentially free to you, I still have to pay for them!

3: if you would normally get a visit at school and get a WBD book or a normal book, we can still supply books to you. Please contact me separately to organise this, as your £1 token cannot be used on the website. (we can take normal Book Tokens, but the WBD tokens aren’t given a “value” on the website, so it cannot be redeemed that way)

4: I am going to be contacting those who run Free Little Libraries in the area to see if I can put some of the WBD books in those so that you can take them and leave your voucher with the Library.

6: I will be sharing as much WBD promotional material on here, Facebook and Instagram as I can, so that you have lots of ideas and activities you can do.

8: If you have any other questions, please do get in touch!

9: I will be posting updates and more links in the next few weeks, leading up to the day, so please do keep checking back!